skip to main | skip to sidebar

Reading the January 2006 issue of American Rifleman the other day, there was a small squib "50 Years Ago" about an ad in the January 1956 issue for Kimball's .30 (carbine caliber) auto pistol, modestly billed as "The World's Most Powerful Automatic Pistol": 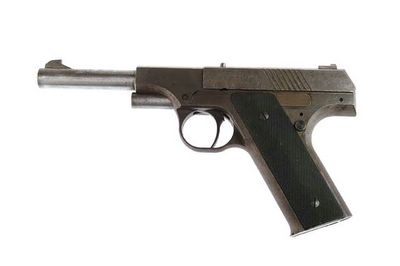 It's not clear from any of the excerpted articles below, or any pictures that I've seen, whether the gun is loaded via a separate or integral magazine.

In 1955, the Kimball appeared on the scene, looking rather like a lightweight Colt or High Standard on steroids. Using a lightweight half-slide like those two .22 rimfire handguns, Kimball chambered his offering--are you ready for this?--in .30 M1 Carbine. A very illogical design!

So he had an excellent way to lock the breech CLOSED until the pressure dropped, right? WRONG. He gouged an annular ring around the inside of the chamber. On firing, the case expanded into the ring, and blowback forces swaged it back down to size as the cartridge pushed the slide back.

The NRA was highly interested in this new "wonder30." They got one of the first specimens off the line, and fired it. In a VERY short period of time, it stopped working, with the slide unwilling to move. They disassembled it.

The design allowed the slide to run back until it hit a vertical post at the rear of the grip -- again, like the .22 rimfire Colt or High Standard. The post was so battered and distorted by trying to stop that light slide that it had mushed out to the sides and jammed the slide.

The NRA sent it back. Kimball explained that the problem was poor heat treatment, and sent another. It failed almost as quickly.

When the second specimen was disassembled, they found that the new hard post had cracked, bent, and was obviously ready to shear off completely. A quick estimate of the path of the slide if the post HAD sheared completely indicated that it would end up in the middle of the face of the shooter--and, given the hammering it was doing when it reached the post, it would probably fly all the way to the face--and some distance into the shooter's head.

The Kimball company ceased production after 238 specimens had been made.

In 1958, the J. Kimball Arms Co. went into business (and out of business quite shortly) producing a .30 Carbine caliber pistol that closely resembled a slightly scaled-up High Standard Field King. It was extremely well-made and functioned on a delayed blow-back principal. This one contributed much to the mystique of the .30 by coming apart in the hands of one W. B. Edwards of GUNS Magazine. The rear slide lugs fractured on the 192nd round. No provenance is found for the legend that the Kimball has lodged its slide in the eyeball of several unlucky shooters, but the story is widely believed.

Hi there,
at last, someone else with an interest in this little monster!

unfortunately my home country has banned its peasants from owning guns, so can't get my dirty little paws on one.

Seems to me that the fancy FN 5.6 pistol is just a de-bugged 5.6 spitfire chambered kimball.

Mr completely was playing with an FN a while back, so I was cheeky enough to ask him for some vital statistics that would allow me to unravel the FN's inner workings. no reply...

looks like the two share the recoiling barrel delay (as the .38 special Colt Gold Cup appears to).

Mr. Bruce. I was searching the net on the Kimball .30 Carbine, and your blog was the only thing i could find with information that you provided. Are you a fan of the Kimball .30? A few years ago my uncle-in-law passed away, and i found a box in the garage with some interesting contents.

Have a browse at what i found :)
http://thefiringline.com/forums/showthread.php?t=311397

Anynonymous: I don't want to say your completely wrong, however in my research of odd, strange, unique and mysterious calibers, i haven't come across 5.6 mm FN. I own an FN 5.7 if thats what your thinking of. If you research chinese weapons, you'd find that the chinese are working up a 5.6 handgun, but as of 2008 it's only a developmental prototype. Yes 5.6 has existed years back, 5.6 johnson/.22 spitfire of the colt scamp/iver-johnson conversions for the m1 carbine. HK is working on a 4.6 mm handgun-not ready yet. The timbs pistol system is 5.7, .22 reed express is a necked down .30 tokarev using .224/5.7 slugs. Yes 5.6 might make a decent varmint cartridge, might even make a decent backup weapon, as for manufacturers making a current pistol in 5.6mm-i can't find one anywhere.

Mr. Bruce
This week, I AM an American icon!